We recently came across a blog post on EDR’s commonground web site illustrating the importance of conducting a Phase I Environmental Site Assessment (Phase I ESA) as part of the due diligence process during a real estate transaction.  The post describes a property owner that found out, long after purchase, their property was a potential source of a chlorinated solvent plume.

The blog post was written by Bill Wagner, an attorney at Taft Stettinius & Hollister LLP whose practice area includes environmental law.  We’ve excerpted a portion of his blog post below.

“…Before purchasing the property in 1995, the buyers reviewed three reports (all prepared four years prior), including a Preliminary Site Assessment, a Subsurface Investigation Report, and a Preliminary Structural Evaluation. They also physically inspected the property, walked the streets, spoke with local business owners, and consulted with a financial consultant regarding the past use and history of the property. But, what they did not do was retain their own environmental professional to perform a Phase I ESA. 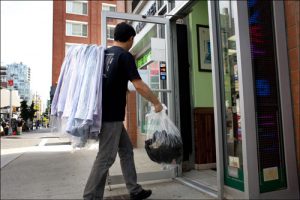 A dry cleaning business called Miller’s Dry Cleaning had operated at the site from 1959 until 1971, but had a street address of 110 North Willis Street. During the construction of the commercial building at 520 North Main, the area known as 110 North Willis became part of the northern portion of 520 North Main. The plaintiffs’ expert said this fact was discernable by reviewing old Sanborn insurance maps. However, there was no evidence that M&M [the buyer] had ever looked at the Sanborn maps or otherwise knew of the presence of the dry cleaning business at 110 North Willis.

Dry cleaning businesses, like Miller’s Dry Cleaning, commonly used tetrachloroethylene (also referred to as perchloroethylene, perc, or PCE) in their operations. Old dry cleaning businesses are notorious for releases of PCE into the environment, often through no fault or intent of the business owners. Solvents like PCE are known to travel quickly to groundwater and migrate offsite…”  Read More

In this case, PCE in ground water was discovered in the surrounding area by a state agency.  One thing lead to another and our hapless property owner was identified as one of the sources of the PCE and was sued to help pay for the cleanup. Because they failed to perform their own Phase I ESA and instead relied upon four year old reports that they weren’t entitled to rely upon, the property owner, at best, had to defend themselves against a lawsuit, and, at worst, would be responsible for a potentially costly cleanup. Both outcomes could have been avoided with proper due diligence.

All too often we see property buyers who don’t want to perform a Phase I ESA.  Or we see property buyers (and sometimes even lenders) perform the Phase I ESA merely to “check off a box” on the due diligence checklist and proceed with the purchase or loan in spite of potential issues identified during the Phase I process. The common reasons are that the due diligence process costs too much or it takes too much time. But as you can see from Bill Wagner’s blog post, the lack of adequate due diligence can be far more costly with the liability reaching back many years.

This site uses Akismet to reduce spam. Learn how your comment data is processed.