SCOPE OF WORK: LSP services, assessment, and remediation at a public works facility 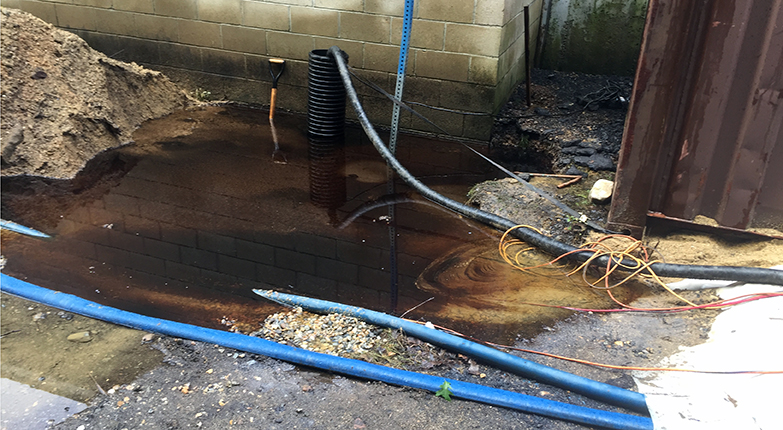 A release of #2 fuel oil occurred from a 10,000-gallon exterior aboveground storage tank adjacent to a Department of Public Works (DPW) building after being inadvertently and unknowingly struck by heavy machinery. As a result, #2 fuel oil impacts extended over an approximate 40-foot by 130-foot area from the point of release, to a depth of six feet below grade surface. Omni Environmental Group was retained by the town’s insurance company to provide Licensed Site Professional (LSP) services, remedial oversight and direction under the Immediate Response Action (IRA), and to achieve regulatory closure in accordance with the Massachusetts Contingency Plan (MCP – 310 CMR 40.0000).

Excavation activities were conducted through use of a track-mounted excavator and soil vactor, combined with hand tooling, to remove approximately 950 tons of petroleum-contaminated soil across the release area. Three fractionation tanks, multiple dewatering sumps, and an automated pump/tank overflow prevention system were required to manage approximately 50,000 gallons of impacted groundwater and 500 gallons of residual oil to facilitate remedial efforts, which coincided with significant precipitation events and a shallow groundwater table. Assessment activities included numerous test pits and soil borings, eleven monitoring wells, and post remedial soil gas evaluation to assist in defining the extent of impacts and to facilitate the collection of confirmatory media samples for laboratory analysis in support of regulatory closure.

During initial response action, a dark and highly viscous oil was identified within select excavation areas, similar in appearance to motor oil or waste oil, and appearing materially different from #2 fuel oil impacts visible in other areas of the Site. This observation represented a potentially separate release condition. Omni Environmental Group performed timely loss investigation and forensic analysis to document that the release condition was solely attributable to highly weathered and degraded #2 fuel oil from the subject tank. Based upon these findings, response actions continued under the existing release tracking number with MassDEP and loss claim with the Town’s insurer.

Ongoing LSP services include quarterly monitoring of Site groundwater and evaluation of the vapor intrusion pathway. The outcome supported the submission of a Permanent Solution Statement with No Conditions to MassDEP in accordance with the MCP.

This site uses cookies. By continuing to browse the site, you are agreeing to our use of cookies.Ok